The looting phase begins when all enemy vehicles become 'Demoralised' (previously indicated by 'Wishes to Surrender!').

Looting is handled in Round-Robin fashion with the starting player, and loot order, being determined randomly.

The Looting screen is shown below. 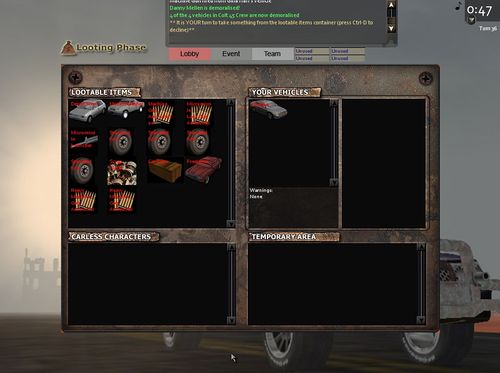 The Looting screen is divided into four areas:

To 'loot' an item simply click on it in the Lootable Items area, and drag it to either the Temporary Area, or to the Car's Contents area if you have previously clicked on a car.

Beneath the Your Vehicles section is a space for Warnings. Messages in this area will notify you of problems with your current loot 'configuration'. For instance, if one of your loot cars does not have a driver, a message will be shown here to remind you of that. Similarly, if you leave people in the Carless Characters area, or anything in the Temporary Area, a message will appear to indicate the loss of those items if you exit the looting phase without correcting the issues.

During the loot phase players can perform the following actions by right-clicking each vehicle and selecting from the drop down menu:

Because looting order is determined randomly, looting etiquette is generally 'first-come, first-served'. Occasionally, a player will request specific items, and then it becomes a group decision about whether or not to grant the player's request.

The only possible exception to this is the distribution of vehicles. It is considered polite, fair, or good sportsmanship (pick the term you are most comfortable with) to allow each member of the squad to have one vehicle if there are enough to go around. In other words, if your turn comes around again, and you've already received a vehicle, you should make sure all other members of the squad have had the opportunity to take a vehicle before taking another.

Squad members who have had their vehicles destroyed are sometimes given priority for vehicle selection so they can get their characters back to town (if they are alive).

Sometimes, and most often with new players who are just starting out, squad members will agree to split any loot proceeds. This means that upon returning to town any loot vehicles will be sold to the mechanic in town (rather than to a player) and the proceeds will be split among the squad members.

The practice is becoming increasingly rare as squads get bigger because a) it is more difficult to keep track of who to distribute money to, and b) in larger squads there are usually enough vehicles that all members receive at least one.

Q. How do I move people between cars?

A. Drag the person to the temporary items area from the car they are in. Then select the car you want them in and drag them to the Car's contents.

Q. How much room do I have?

Q. What should I take?

A. This really depends on a combination of factors, but generally look for items with good value (this can be learned by perusing the for sale items in the local flea market) that will fit in your car(s). With vehicles it depends but generally any car is better than no car. You can leave your rental in wilderness, but you will lose your $5000 deposit. This usually isn't a good idea because only rarely is a loot car going to be worth more than $5000. If you want to abandon your rental, be sure to drag it to the available items in case another player has an extra driver. This is an easy profit for them (assuming you don't have a character available). Also, keep a look out for the specific type of ammo your guns use. you'll more than likely need to reload your guns before a return encounter.

Q. How is the loot order determined?

Note: If you take too long (approx 1 minute) the game will skip your turn and proceed to the next person. Usually only happens if you have no idea what to take and try to have a conversation about it. Once you become more familiar with looting it isn't an issue.

Q. Can I do secondary activities at any time or only when it is my turn to loot?

A. You can do secondary activities at any time. If the menu doesn't come up right away, try again. It can sometimes take several tries to see it. You can also move loot to and from the temporary area at any time (i.e. ammo can be moved between your own cars to use for weapon reloads)