Welcome! Hopefully, this will be an easy-to-follow, straightforward guide to getting started with Darkwind. If it isn't...either change it (it's a Wiki after all), or comment on it in the discussion section so somebody else can change it. :-)

After you've signed up on the main site and created your gang, you'll end up on the web management interface of Darkwind. Here is where you'll plan your long term stuff, buy and sell things, recruit people and so on, while the client (Game) is more specialized toward participating in events. You can subscribe to events from both, so you can just fire up the client to start playing and getting the feeling of the game. The client interface is pretty straightforward: 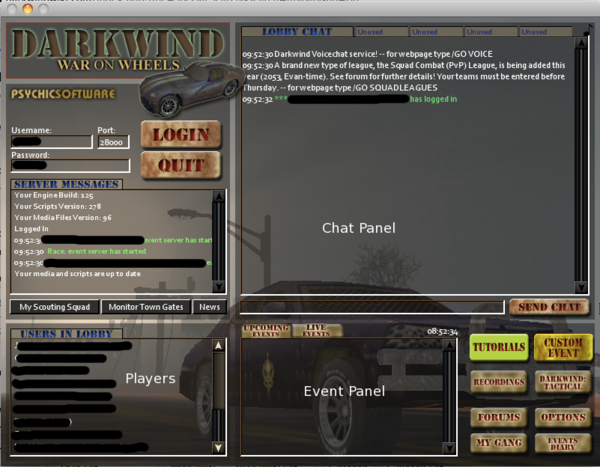 There is a big panel showing the global game chat (which is also available in game), there is a panel which shows the upcoming events to which you may register and the live events that you may spectate (or play if registered) and there is a panel listing the current players. It would be really unusual to be alone in the Lobby, so the first thing you should do is introduce yourself. A simple, 'Hi. I'm new' should suffice, and lets the veteran players and Marshals (players whose names are bracketed by asterisks (*)) know that you are new, and may need some help getting up and running.

Launch your tutorial by clicking the Tutorials button in the game client. (Even though the button says Tutorials, there is only one.) This will take you to the in-game interface, centered on your car. Follow the instructions literally to proceed forward. If you are stuck on a particular tutorial step, repeat what you're asked to do making sure to use the keys specified in the tutorial balloon. Here's a hint; you can run the tutorial as often as you like! Run it a second time to just drive around a bit and get used to the controls. You only get the prize money the first time through though.

Notice that the global lobby chat remains available on the top of the screen. This panel's content is controlled by the buttons directly under it: "Lobby" shows the global chat, "Events" shows the event log for the current game, while the "Team" button shows the private chat of the event you're in.

Now you've managed the basics of the game, there is still some information that you may find useful for more prolonged combats:

When you return to the Lobby, look for an event that is starting soon. In-town events are Races, Death Races, and Arena Combats, or their League equivalents.

So you tried out the tutorial. What next? Let's check out your gang! Fire up your browser and go to www.dark-wind.com (or click on the 'MY GANG' button in the game interface) and log on if required. You will be presented with several links across the top that you will become very familiar with: Gangs, Events, Squads, Characters, Vehicles, and Places.

Lets start with "Characters": Here you will see your first three gang members! I wouldn't get attached; many people lose them within a couple months. Don't worry; you will recruit more later. This page tells you a lot of stuff about your characters, but all you really want to know right now is driving skill and gunnery skill. Each character starts with one skill around 20, and the rest lower. Hopefully you have someone with good driving, and someone with good gunnery.

The next place to go is "Places": Select Somerset. You will see an image of Somerset; click on 'Dexter's Tavern'. Here you can recruit new characters into your gang. As a starting gang, you can recruit two free characters. After that the cost is the same as for everyone else. Note: The cost drops everyday until you can recruit another free character within a week. My suggestion is to look for drivers and gunners to start with; mostly gunners.

Lets go enter an event! Back to the Dark-Wind client.

It is recommended that you start with the Racing events, then progress to the Death Races, and finally to the Combats. Even in "controlled" town events, a character's death is very possible. A computer controlled car may ram you after you've resigned if you're in the way, or you may just just have a really unlucky crash. Still, consider resigning just a little before your car armor is worn out. Make sure you know all the key commands for in-town events. Hit [F1] to learn them all.

Pay particular attention when an enemy vehicle 'resigns' and TRY to make sure you do not fire at a resigned enemy. This is because each car in an in-town event belongs to an NPC gang, and that gang will seek revenge against you if you do not respect their resignation.

The League events provide League points in addition to prize money for contestants who place (usually 8th or higher).

Also, don't hesitate to ask others to join the event. Often, you will get some veteran players involved, and that will increase the prize money (and League Points for League events) available.

Doing the events in the order above will do a couple of things:

The last one is really the most important, as patience is key when you get involved in wilderness scouting (Initial Scout Guide).

After Some More Practicing

After you're confident enough with the driving/shooting part of the game, you might want to ask some people to help you out on your first scout. Remember to prepare ahead of this so as to be ready when the opportunity to join a scouting arises; in order to do so you will need to return to the web management interface.

First of all, you'll need a car. If you don't feel ready to lose your main characters in this event you might consider hiring a few more recruits.

To choose a car, select Vehicles -> My Vehicles from the top navigation bar on the web interface. If you do not yet have a scout ready vehicle of your own, this page also includes the option for renting various kinds of vehicles; the "Antagonist" would be a good one for starters. Remember that rental cars don't have off-road wheels and may suffer on sandy terrain.

To recruit some characters to your gang, select Places -> Somerset from the navigation bar. Clicking on Dexter's Tavern will take you to a page where you can recruit more gangers. To man your new car, a driver and a heavy gunner will do.

If you're subscribed, you can take this opportunity to go from the Somerset page to the Marketplace to buy some more ammo for your guns. (You can see which guns you have mounted on your "Borrowed" car on your vehicle page)

Now go to the Vehicles page, select your chosen vehicle and assign a Driver and Gunner(s), along with ammunition (if subscribed), from the pop-up that appears. It is advised to have a Driver and a Gunner (or more) - at least - if your car can hold more than one gunner it will help you because the driver suffers a penalty to his gunnery skill because he's driving. Dedicated gunners do not suffer the this type of penalty. If you survive the encounter and win some loot, you can have one or more gunners get out and drive a looted car back. More about scouting on the dedicated pages: Initial Scout Guide

You're now ready to roll, so go to the lobby chat in the client and ask for somebody to help you out on scouting or just ask to join some other player's party. Let them know that this is your first scout because they will steer clear of more dangerous areas and offer you advice. They will provide you with a squad name to join along with the password of the scout, so go again to the web interface and select Squad -> Search Squads from the navigation bar; join the squad, add your vehicle (DOUBLE CHECK you have your driver and gunner(s) in the car, along with reloads if possible) and notify your squad leader in the lobby that you're ready. Shortly afterwards you will have the notification that the scouting event is starting and you'll be presented with the in-game view. Be sure to follow the advice of the other players to stay alive, and good luck!

Once you get a few group scouts under your belt and have done a few in-town events, its time to start managing your gang. There are dozens of different philosophies to running a successful gang, but there are a few basics that everyone will need.

Begin by training a few of your characters in Scouting. The best way to do this is to recruit characters with the Scouting skill and put them in fast cars with moderately sized fuel tanks, and send them to towns near Somerset completing small missions. If you are attacked, simply outrun your enemies. You can chose to escape at 351 meters, and automatically escape at 500 meters. Eventually you will get a number of highly skilled scouts, which will reduce the danger of larger convoys of vehicles scouting and running between towns as long as you put a good scout in the convoy.